We ran Donald Trump's Letter through Personality AI, and here's what we learned

On Tuesday, Donald Trump sent a letter to House Speaker Nancy Pelosi to express his opposition to the upcoming impeachment vote. To call it strongly worded would be an understatement.

Now, heated political arguments aside, I thought it was fascinating on a number of levels after reading it for the first time...

Of course, it was covered with the President's signature communication style, with combative exclamations ("You view democracy as your enemy!"), lots of branding ("Before the Impeachment Hoax, it was the Russian Witch Hunt"), and dramatic hyperbole abound ("More due process was afforded to those accused in the Salem Witch Trials"). These features all fall in line with his personality profile that Crystal has generated over the years by analyzing his communication.

However, the letter was structured very differently than most of his official correspondence.

While Trump usually communicates with short, punch tweet streams online and long, meandering sales pitches at his rallies, this letter was far more linear. Despite the extremely expressive language, it contained a fairly well-organized presentation of his administrations arguments against impeachment. Clearly, the President had some help writing this, and the co-author(s) fingerprints were evident.

I was very curious about what our Personality AI would say about these differences (or if it would show me any differences at all). So I opened up the text version of the letter, highlighted the body text, and used our Chrome Extension to predict the personality of the letter. 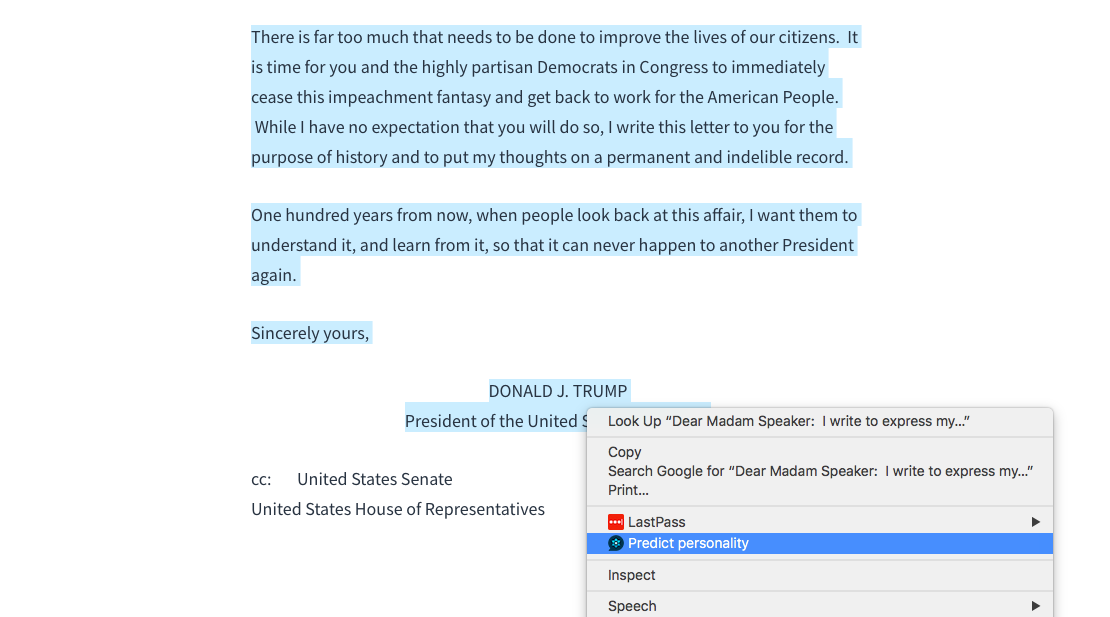 Sure enough, the personality type of the letter was a little different that Trump's general personality profile: Questioner (CD). 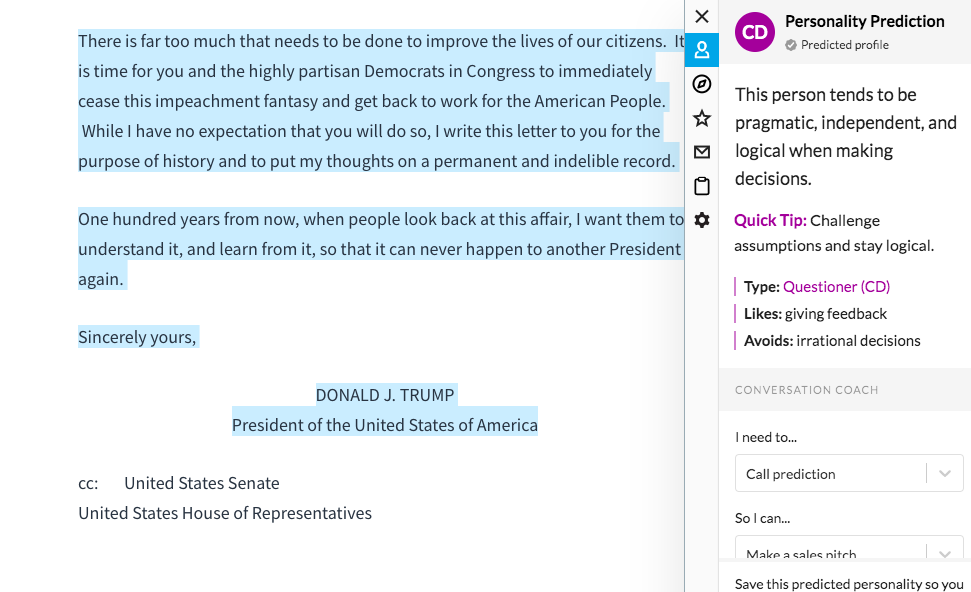 To compare these profiles with each other, I saved the letter-based personality prediction to my Crystal dashboard and generated some reports. 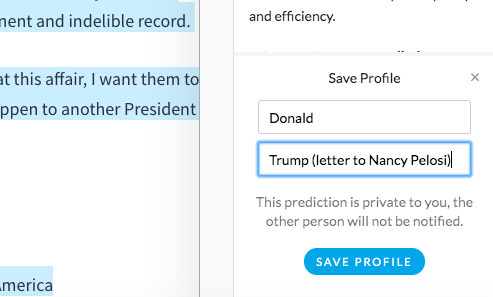 For the letter's personality, I added a group photo of Trump's cabinet to help differentiate it from Trump's individual profile.

Here's what happened when I compared Trump's individual personality with the personality of the letter, which is presumably the overall "personality" of his administration: 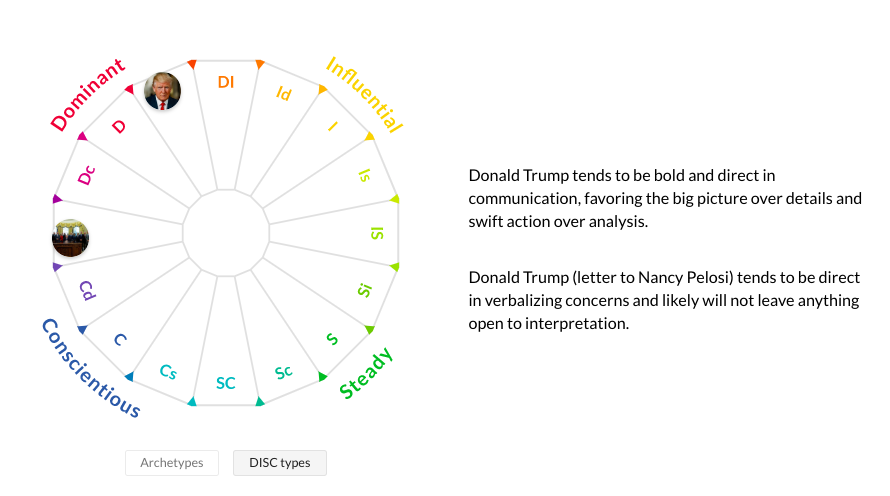 We can draw some really interesting insights here. Perhaps the most important one is that President Trump clearly has some significant personality differences from the Trump administration as whole. Just look at how far apart they are on traits like risk tolerance, personal expression, and autonomy. 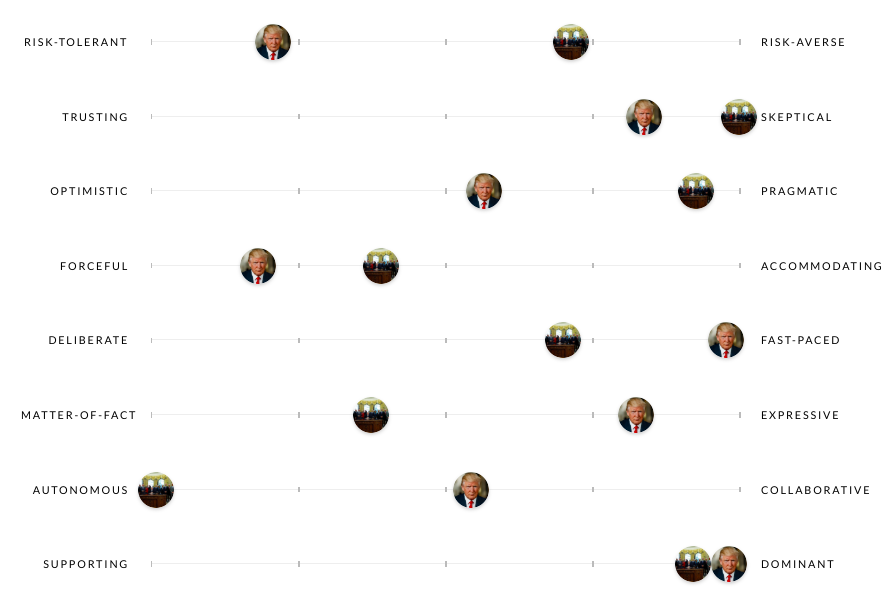 This means that while Nancy Pelosi and the Democrats usually push back against the President's blunt, forceful, and freewheeling Driver (Di) personality, they may actually be better served by focusing on the administration's Questioner (CD) personality type.

Here's what Crystal would tell them...

Misunderstanding is at the root of most conflicts. In this case, we have two political parties that seem to be living in different worlds, which prevents them from understanding each other, leading them to disagree on even the most basic facts.

However, a little bit of empathy can go a long way. While that may not happen in Washington, you can equip yourself to negotiate better, navigate conflict, and communicate more effectively with personality insights. Click here to take a personality test!

The Personality Behind WeWork's Downfall
coaching and leadership

Meghan, Duchess of Sussex: How Personality Affected Her Relationship with the Press
personality ai

We ran Donald Trump's Letter through Personality AI, and here's what we learned
coaching and leadership

How to Talk to Anyone: The Empathy Equation
coaching and leadership

Santa Claus: The Personality of a Legend