In February, after 15 years of serving as Chief Executive Officer of The Walt Disney Company, Bob Iger announced he was stepping down sooner than expected.

Iger had spent years prepping Disney’s board of directors for his retirement, but his departure as CEO still came as a shock to much of the public. Though he’ll serve as executive chairman through 2021, Iger’s decision to leave his CEO position early to focus on some of Disney’s creative endeavors has some people worried. Will his replacement continue the growth Bob Iger started?

The world got to know Bob Iger throughout his time as CEO, when he was able to help the company pursue ambitious, creative endeavors by acquiring Lucasfilm, Pixar, Marvel, and 21st Century Fox, all while maintaining his reputation as one of the nicest people in Hollywood.

So it’s no wonder that much of the public is curious about his replacement. Bob Chapek, previously chairman of Disney parks, experience, and products, is the new CEO of The Walt Disney Company. Though Bob Chapek has already accomplished much in his career, like helping Bob Iger launch Shanghai Disneyland Park, which has been an incredibly successful venture for Disney, we still don’t know much about him.

The privacy around the new CEO leads many of us to wonder: Who is Bob Chapek? And how does he compare to Bob Iger?

Here at Crystal, we’ve used Personality AI to analyze each of their personalities and discuss where each of their natural skills lie, what their differences may be, and how the change may impact Disney. Here’s how they compared: 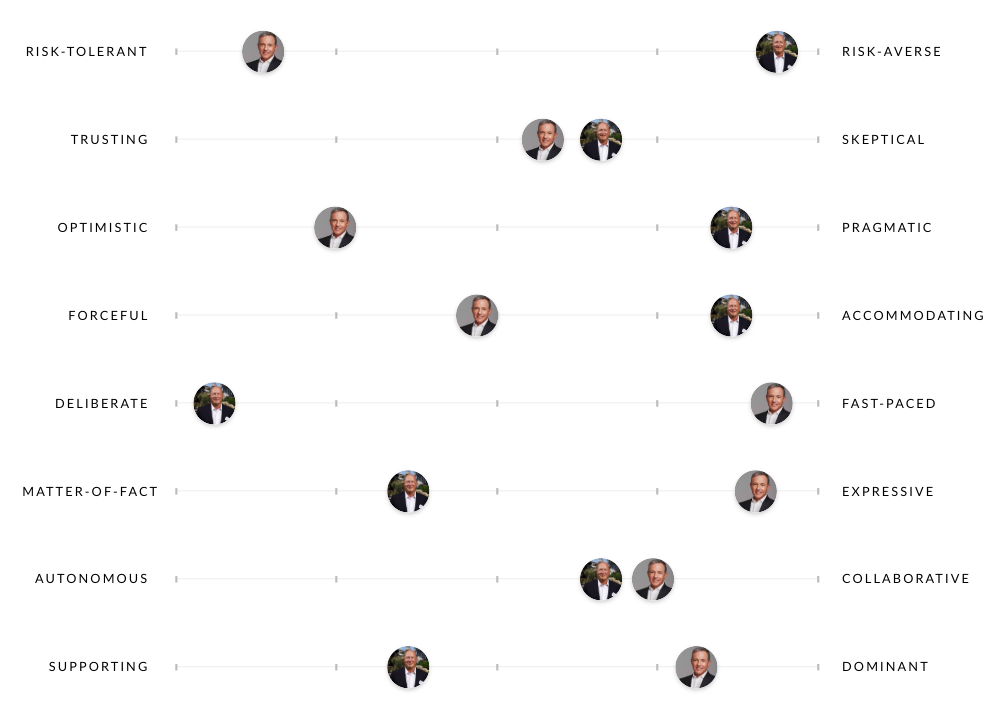 From appearances, it looks like the two couldn’t be more different. But how do their individual strengths and blindspots play into their ability to succeed as CEO of one of the largest companies in the world?

Bob Iger is a natural Influencer (Id) personality. He is comfortable taking the lead and enthusiastically shares ideas. Throughout his successful time at Disney, Iger has been seen as a creative, driven person who enjoyed pursuing new opportunities. He leaned heavily into his natural strengths as an Influencer personality type to help him accomplish everything he did.

Iger is very decisive; he is able to think on his feet and stand behind his choices, even if they turn out to be wrong. His ability to show confidence in his actions is what helped other stakeholders at Disney feel so comfortable, even through periods of significant change. Iger’s decision-making skills helped him lead the movement in acquiring major production studios

Like other Influencers, he’s comfortable taking significant risks. Most of Iger’s decisions ended up being beneficial for Disney, but they were very pricey, high-risk choices when they were made. Through acquiring companies, opening new theme parks, and making expensive blockbusters, he ended up increasing Disney’s market value from $48.4 billion when he started as CEO in October of 2005 to about $273 billion by December of 2019.

Iger’s innovative, creative spirit helped Disney thrive over the 15 years he served as CEO. He constantly pursued new, exciting ideas and was able to help Disney take on major, out-of-the-box projects, like investing a lot of the company’s resources back into animation, through driving the growth of Walt Disney Animation Studios and acquiring Pixar.

A natural Optimist, Iger is often able to look on the bright side of a situation. Rather than dwelling on the losses anytime he faced failure or disappointment, he was able to bounce back quickly and look for the next best idea. This likely saved Disney time and ultimately led to their investment in plenty of great companies and  ideas.

Iger is often seen as a charismatic, authentic leader. He encourages others to admit their mistakes, show they care, and operate with a high standard of morality. More than just seeking success, Iger valued openness and honesty in his professional relationships. In the past, he has clearly communicated with the public where he feels he has messed up, including admitting in an interview with The Hollywood Reporter that rushing the new Star Wars movies was his decision, saying “as I look back, I think the mistake that I made — I take the blame — was a little too much, too fast.”

While Bob Iger is an outgoing, lively, and wildly innovative influencer, Bob Chapek is a more reserved, logical, and patient Stabilizer (SC). Chapek is more likely to spend his time as CEO ensuring Disney is able to sustain their successes. Rather than focusing on pursuing many new projects at once, Chapek is likely to invest time and resources into their current projects to make sure they are able to succeed.

Chapek is naturally organized and detail-oriented. His ability to oversee many projects at a time, while ensuring that each detail is accounted for may help him see each plan through to completion, but could also cause him a lot of stress at such a major company. While his attentiveness may benefit smaller projects, will he be able to stay high-level enough to run a company the size of Disney?

He is also more reserved than Iger. While Iger is outgoing and charismatic, Chapek is more comfortable staying out of the spotlight. Although he still enjoys connecting with others and is likely to be approachable, he does have the potential to become drained by a role that requires him to be the center of attention in a lot of circumstances.

Like most Stabilizers, Chapek enjoys stability and security in his life. He tends to steadily pursue long-term goals, rather than jumping into something unexpected. This could be a good change for the company; Iger was able to bring on so many new projects and endeavors, but Chapek will likely be skilled at maintaining the company’s balance and investing resources into what they already have. However, it may also lead the company to move attention away from its innovative status.

He is also fairly risk-averse in his decision-making. Chapek tends to be comfortable with predictability and trustworthy solutions. He may have a more difficult time pursuing new ideas if they come with major risks. But his careful thinking may help Disney remain balanced at the top by preventing others in the organization from making overly bold, hasty choices.

Chapek is analytically-minded and tends to lack experience in the creative, developmental side of things, like in television or movies, which will likely be a sharp contrast to Iger, who spent decades working in TV before becoming CEO of Disney. Chapek may need to be careful when offering creative input since it is likely out of his comfort zone. Instead of taking charge, he should allow and encourage those in charge of the creative aspects of the company to lead the way.

Despite their personality differences, Iger and Chapek were each chosen as CEO for their unique talents and dedication to The Walt Disney Company. Just like Iger has been, Chapek shows a willingness to grow and learn, which will ultimately benefit him and the company. As Iger continues to help Chapek learn the ropes over the next couple of years, it’s important that Iger allows Chapek to take charge as much as possible so he has an opportunity to feel more comfortable in Disney’s most important leadership position.

Chapek may have a difficult time adapting to unforeseen circumstances and will likely need to stretch his abilities to feel more comfortable as CEO, but with his careful thinking and follow-through, Chapek may be an important, beneficial leader for Disney as they begin to adjust to running without Iger at the top.

New! The Next Step In Personality Descriptors
coaching and leadership

Crystal Has a New Captain
sales | our picks

Santa Claus: The Personality of a Legend
coaching and leadership